Key Club makes a difference for local children with donation 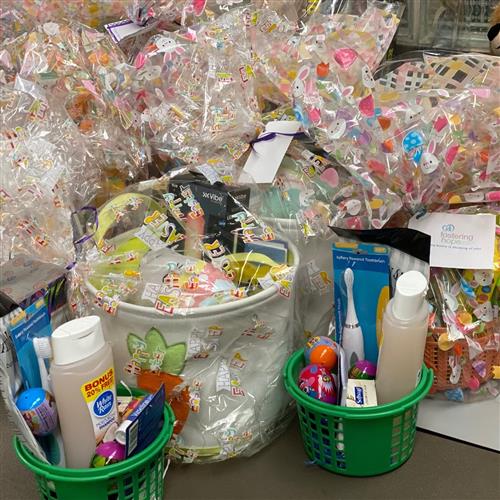 Service to others is one of the important skills that students learn as part of the Fairview Advantage. The 30-plus members of the school’s Key Club take that act of giving to the next level, as the group volunteers all year in their school, community, and throughout the Northeast Ohio region.

Recently, the group was recognized by the Cuyahoga County Department of Health and Human Services for their efforts in collecting items for Easter baskets for foster children this spring.

“We just collected as much as we could,” Grace Munro, a junior and president of the Key Club explained. “We opened it to everyone in the school, and they could donate Easter things, like candy or toys, stuffed animals, books, and things like that. Socks was another big thing.”

The group collected the items for just a couple of weeks, wrapped up the baskets, and sent them off to the Department of Children and Family Services. The number of items donated by students and staff were were more than double what they were expecting.

“We had 21 baskets this year,” Meghann Peters, French teacher and advisor for Key Club explained. “We were expecting maybe 10. We had two extra baskets to make 12. We had so many materials that were brought in that we had to go out and buy even more baskets.”

Key Club members enjoyed not only giving the baskets but the fellowship and fun that comes with creatively packaging the baskets.

“It was fun, too, putting them together,” Kelli Windman, a junior and treasurer of Key Club expressed. “We paired up and worked together to make the basket look nice. It was just a fun, little team-bonding thing.”

“It was exciting to think about the impact we were going to make,” Munro added.

The Easter basket donation project has been a part of Key Club for at least five years, with an interruption the past couple of years due to the pandemic. With the pandemic hopefully behind them, the club is planning even more projects next year, including participating in the Juvenile Diabetes Research Foundation Walk at the Cleveland Metroparks  Zoo.

Key Club members also volunteer at a variety of events in the district and community. Recently, Key Club members volunteered at the Gilles-Sweet Mother/Son Dance and at the State of the Community Address at the Gemini Center. They also have organized gift drives for families during the holiday season.

“[Key Club] is really fulfilling,” Bridget Camarillo, vice-president of Key Club and a junior expressed. “Especially with the Easter baskets, seeing and knowing those things are going to those foster kids. People who don’t get things that we see as normal, to be able to make that happen for them, it just feels good to know that. The same thing also goes for the Christmas presents we put together. That was also really fulfilling.”

“We try to do stuff together, like the Easter baskets, but we also encourage people to go off on their own or in small groups,” Munro added. “Especially if that’s something they are passionate about. It gives people the opportunity to do what they are interested in as well as doing things with the club.”

PHOTO CAPTION: Some of the baskets created by students in the Key Club at Fairview High School. The baskets were donated to help foster children in the Greater Cleveland area.