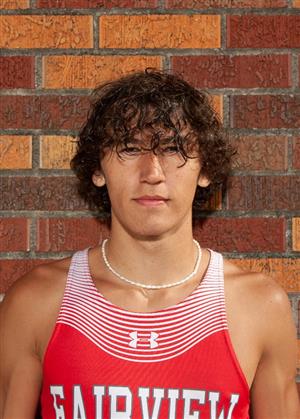 Imagine being so good at something that you’re one of the best in the state after just two years. That’s just the case with Fairview High School senior Ben Myers.

Myers is one of the latest highly successful cross-country runners from Fairview High School. Over the past four seasons, runners from this Warriors program competed for a state title in Columbus. In fact, the Warriors have been represented five out of the last eight years at the state cross-country meet - in 2015, 2019, 2020, 2021, and now 2022.

Myers currently owns the fastest-known time in school history, recording a 15:52 twice this season: once at the Legends Invitational in Cortland, OH and the other at the Great Lakes Conference Championship.

After earning the GLC title on Oct. 15, he was named the Division II district champion at Lorain County Community College, a race he won “by a wide margin.” Then he finished 12th at the regional competition in Youngstown, which qualified him for the state meet on Nov. 5. Heading into that competition, Myers was ranked #13 in Ohio.

Humble about his accomplishments, Myers admits that he initially started running cross-country as a junior to get better between track and field seasons.

“I joined the high school track team my sophomore year at the last minute,” Myers expressed. “I ended up doing cross-country to get better for track. In my junior year then, I ended up liking cross country a thousand times more than I liked track. Ever since then, it’s pretty much been my whole life.”

After watching Myers keep up with more experienced seniors on the track team as a sophomore, cross-county coach Jen Dahler knew Myers was a special talent.

“I told him he was probably the most naturally talented runner I’ve ever seen,” Dahler said. “He was naturally on a different level than everyone else. He came out for cross-country and had a really great year in his junior year, even though he got injured.”

According to Myers, the experience of running in cross-country changed his life, both in and out of the school building.

With the cross-country season now concluded, Myers now switches his attention back to track and field. After grinding through some injuries last season, Myers is excited about the potential for track and field this year.

“Since it was kind of like my recovery season last season in track, I know I can blow out all of my personal records and times out of the park. It’s going to be exciting to run fast.”

With all the recent success on the cross-country team and contributions from athletes like Myers, Dahler is excited about the future of the program.

“Now the younger kids see that they can do it too,” Dahler said. “I think when they can start to see it and then believe in themselves - they can see themselves in that Fairview jersey - it turns into, ‘Okay, we are doing this,’ which is pretty awesome.”